Last week, on the five-year anniversary of my excisional biopsy, I announced I’d lost my Big Girl Panties and was on the verge of an ugly cry.

Today marks the five-year cancerversary of my diagnosis. I’ve already had one cry. It wasn’t ugly. It was actually kind of beautiful. I’m happy, I’m sad. I’m hopeful, I’m anxious. I’m mostly all of these things on a regular basis but

So how do you recover after you announce to the world that you lost your big girl panties?
You have that big ugly cry.
You compartmentalize the day to day from the big picture.
You take some time to center yourself.
You read the messages of support and love, many from people you’ve never even met but who have experienced similar “lost panties” moments.
And then you announce to the world that “Going Commando” is the BEST. ADVICE. EVER.

Actually, I don’t know how YOU recover, but that’s how I’m getting back in the game.

I am now on my way to the world’s largest oncology conference feeling a complete sense of gratitude, empowerment and excitement. Basically I am feeling the EXACT opposite of how I felt just over a week ago.

My actual “diagnosis cancerversary” involved some tears. Some quiet acknowledgement. A LOT of outside walks. And, perhaps the most healing, speaking with those who are smack dab in the middle of their own $hitty cancer experience.

I mentioned before that the best advice I’d gotten when I exposed all my vulnerabilities was to go without the constraint of feeling like you had to have it all put together.

While that was certainly the most humorous and the phrase I’ve repeated to myself multiple times a day for a giggle and a reminder, the truly best advice was from a woman I’ve never met, “Treat yourself as you would one of us.”

And yep, I’m on the verge of tears as I type those words. (It’s gonna be a long month evidently)
The truth is I walk around explaining that we all just want to be seen, heard and held. I just forget sometime that it’s okay to just let others hold you.

The best gift I received? Acceptance.

Most days?
Onward and Upward.
To Infinity and Beyond.

But some days?
Go Commando.
Just Get To Tomorrow.

And everyday “Treat yourself as you would one of us.”

I lost my big girl panties and I’m on the verge of an ugly cry.

For whatever reason, I am struggling and have been struggling for the past few weeks. 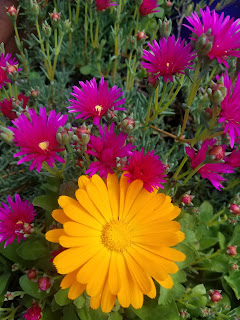 May is the start of my “cancerversary” season.

In other words, the “For whatever reason” is really “Because of effing cancer.”

And I have a hard time saying this out loud. Because this season marks five years and popular opinion is that this should be a veritable celebration of achieving ‘good statistic status’.

But, let’s be honest, cancer is as much a mindf%#k as well as a physiological disease.

Today marks five years since my first excisional biopsy. A big thing that became a small thing that is now part of a huge thing that I’m still trying to integrate into my life.

Today is one of the first of many babysteps that will land me square in the FIVE-YEAR CANCER SURVIVOR club.

I thought I’d processed the handling of this milestone already.

I thought I was ready to take my deep breath; acknowledge my fear and pain; acknowledge the forever guilt in dragging my family into the world of cancer; acknowledge my attempts of turning a crap diagnosis into a meaningful path forward.

I really thought I was ready to nod my head at this series of days and weeks and then proceed in a way that celebrates the beauty of each day and also respects that every day in good health is a gift not afforded to all people.

I am so NOT ready for that today.

I’m pent up and nervous about my own future health. I’m riddled with guilt over not being able to keep my neuroses to myself. I’m sick in my gut watching the suffering and premature demise of others not so fortunate as myself. And I’m angry with myself for not making the absolute most of every day.

I think I just need to acknowledge that, despite my current good health, remembering this date five years ago makes me sad and scared and angry.

Typing relaxes all my muscles and now that ugly cry is spilling out onto my keyboard.

When I’ve wiped everything down I’ll start looking for those big girl panties.
Or, maybe, I just won’t wear any today.


Posted by coffeemommy at 9:13 AM No comments:

A Little "Just to Be Sure" Scanxiety


There have been so many times in the past few months that I’ve composed blogs in my head and thought – I should really write that down. And each one of those times I’ve been too busy to write prioritized other things ahead of writing out whatever was in my head.

Today I’ve not much of an excuse. I just returned from a follow-up oncology visit and have just under two hours before I’m back at the medical building for a breast ultrasound. We’re taking a better look at what is likely a lymph node on the side of my right foob. It’s 99% a lymph node but doesn’t have the “fleshy” feel of my other lymph nodes so Dr. L wants a better look.

In a few hours we’ll have confirmed it’s just a healthy lymph node and I’ll get on with the day-to-day but, at this very moment, I’m feeling that familiar scanxiety.

Amusingly enough I was actually completely laissez-faire about the whole affair during the discussion with Dr. L and the scheduling with the imaging department. I was also fairly meh about things for about two hours afterwards. But now, at home, waiting to return for my appointment and trying to get some work done, I’m a little unnerved.

I guess that’s what scanxiety is for me these days – going through the “oh shit” and the “what if” all the way to 114 a day die from metastatic breast cancer. Going all the way to Diane and Beth and Beth and Angela and Lori and Janet and so many others. And, most recently April, Dianne and Vicki.

So, when a routine oncology follow-up turns into a “let’s just make SURE it’s nothing ultrasound appointment” there are a lot more things for me to unpack.

I am just scanxious and that’s okay.


Posted by coffeemommy at 1:56 PM No comments: