On Being That Girl

Six months ago, upon waking up from a righteous mix of Propofol and Versed, I wanted to be THAT girl.
The girl who conquers breast cancer mind, body and spirit and moves on with her life stronger than ever before.

I am the girl who showed up to the Kaiser Permanente Survivor event five days post-op and took the mic to speak on profound gratitude.

I am the girl who walked a 10K a week after a mastectomy.

I am the girl who tent camped and hiked in Sequoia National Park three and a half weeks post-op.

I am the girl who rocked a bikini stuffed with a prosthetic breast on the shores of the Pacific Ocean two months post-op.

I am the girl who continues to show up at the breast cancer support group, decades younger than most of the women, with a can-do attitude and a positive spirit.

And I desperately wanted to be the girl who practiced mindful gratitude, overlooked the loss of her left breast, thanked her community six months after diagnosis and then closed the book on cancer.

But I’m not that girl.

So I’m having surgery.

Women seeking reconstructive surgery post-mastectomy have a wealth of choices – IF they have enough of their own tissue to move around:

All of the above procedures use the patient’s own tissue and relocate it to the breast area.

My options were limited due to my body shape and size.

So, on January 17th, one year to the day of my mom’s breast cancer diagnosis, and seven months to the day after my first mastectomy, I will again be wheeled into the operating room.

Things will be different for sure. I will be having a right side skin sparing mastectomy and double reconstruction but I will not be having a sentinel node biopsy and I will not wake fearing what they found in my breast tissue. My right side mastectomy is prophylactic and was decided upon after much personal thought and extensive conference with my oncologist, breast surgeon, plastic surgeon and family.

And then it came down to a math problem of sorts.

I am uneven. I want to be even.

If my plastic surgeon reconstructs a breast on the left side, it will be the pert breast of a 20-year old. My right side breast is 40 years old and nursed two children. I would still not be even.

My plastic surgeon sees no problem with that and could add a small implant to the right side to even me up. The rest of my team sees a slight problem with that right side bump since even a small implant in the right breast could potentially impede the accuracy of any future mammograms. In math, we'd call that a variable. And then we'd solve for it.

As a reminder, my first mammogram caught only calcifications. My excisional biopsy found diffuse DCIS and my two invasive tumors were only found by the pathologist who chopped up my breast tissue post-mastectomy. In other words, dense breast tissue has not served me well in the mammography space and adding more padding certainly won’t help anyone get a clean view of what's going on in there.

Nor will it help with my persistent anxiety around ‘what-if’.

Because I am that kind of girl.

In less than a month, I will wake up lopsided with tissue expanders in place under my chest wall. My breasts will never look normal (something about that enormous scar that starts low, crosses the left side of my chest and ends high under my armpit). I will begin a process of regular 'fills' until my skin (especially on the left side) stretches enough to accommodate a B cup again. Then I will have exchange surgery to trade my expanders for implants.

And then will it be over? Will I then be able to close the door on cancer and move on? I don't think it happens exactly like that for anyone. I don't think you 'get over' cancer, I think you incorporate the fear and the anxiety and the gratitude for all that is good in your life into your mindset. As much as I'd like to close the book on the last six months or, better yet, rewrite them, breast cancer is part of my story.

But it's not the only part and it sure is hell isn't the ending.

I will most likely always suffer from a bit of anxiety around oncology follow-ups and random body pains but I will be on the path to feeling whole again. I will be making a decision and taking control of my own body as much as any of us are able.

I am THAT girl.

Prevention vs. Risk Reduction vs. Screening

After a series of particularly frustrating exchanges, I have decided it will take more than 140 characters to not only explain the distinction between prevention, risk reduction and screening in ALL cancers but to also explain why a distinction is so critical.

Prevention: definition 1. To keep from happening


You get the idea.

But wait! There’s this list you received from your doctor’s office, right? Certainly it’s titled something provocative like: “Prevent Breast Cancer” and includes some or all of the following: 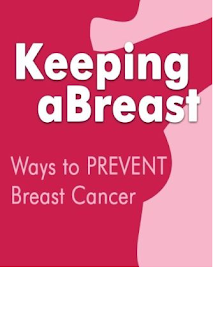 I did all those.

And I was diagnosed at age 40 with two tumors of invasive ductal carcinoma, diffuse DCIS and lymph node involvement in my left breast. Did I misunderstand the rules for preventing breast cancer and do something wrong? No. I didn’t.  I tried to reduce my risk and it didn’t work. The above list may be a compilation of helpful hints but, even collectively, they do not prevent breast cancer, they help reduce risk.

Risk reduction in the spectrum of the healthcare industry attempts to lessen our chances of receiving a diagnosis by removing potential harmful exposures and/or behaviors from our lives and, in some cases, replacing them with behaviors that can help fend off disease.

To use skin cancer as an example, we can use sunblock liberally but we are merely attempting to reduce our risk. Skin cancer is still a possibility and a combination of exposure and genetics may render our efforts utterly useless.

Never-smokers without lung cancer who may feel they can cross malignant non-small cell carcinoma off their worry list should meet JanetFreeman who “never smoked anything except a salmon.”

And there are tens of thousands more who followed the list of “prevention” tactics but were diagnosed anyway. Specifically, even if you are a never smoker, you may still have some of the following risk factors for lung cancer:
Risk reduction is limiting exposure to the above but does not guarantee prevention. And a genetic predisposition is hard to shy away from.

If we refer back to the sage if woefully mis-titled “Prevent Breast Cancer” document above, I’d like to call out the last 'prevention technique' - the oft-touted annual mammogram.

Mammograms are screening tools. Regular screening is encouraged so anomalies can be found as early as possible, be treated as quickly as possible and, hopefully, result in a better longer term outcome.

DISTINCTION is NOT A SEMANTICS ISSUE

This is not a tomato – tomato (c’mon, you’re supposed to pronounce those differently when you read them!) issue. Why is the terminology distinction important? Three reasons bubble to the top for me:
Cancer sucks, no one ‘deserves’ it. Please don’t propagate a false sense of security or imply wrongdoing by patients who are diagnosed by claiming cancer is preventable. Please choose your words wisely.

If I were asked to verbally sum the effort and payoff of thirty days of mindful gratitude, I could accomplish the feat in two words: invigoratingly exhausting.

Living mindfully is, in and of itself, invigorating. Waking each morning without pre-conceived notions but remaining actively receptive to the enormous amounts of people, places, events, things and situations for which I have to be grateful for was energizing.

Indeed the fatigue had nothing to do with the writing. The fatigue was a mental fatigue. An over processing problem of sorts since the universe did not see fit to stop illness, death or despair for me to simply revel in the goodness. I was constantly feeling overwhelmed with appreciation but intermittently dealing with profound sadness and grief.

In those same 30 days, a friend died, an uncle received a terminal diagnosis and another friend’s cancer reawakened.

While gratitude felt hard to come by during those days, on Day 13, I learned that sometimes all you can do is just take the next breath. I will hold this lesson in my arsenal of dealing-with-crappy-day weapons.

There were also a few moments of personal despair when I realized that I had subconsciously planned for this party to mark the end of my ‘cancer journey’.

Cancer may not always be in the back of my mind but six months in, cancer is the first thing I think of whenever I have a pain. A headache? Brain Mets. Bad tummy? Liver mets.

Please know that I understand this is ridiculous and please know that the jump is nonetheless very real. Several others (new and old to the cancer scene) have seconded these thoughts. They are rationally irrational but they are real.

Six months after my diagnosis, I am healthy, happy and looking forward (with only minor trepidation) to reconstructive surgery. I have a loving family, generous friends and a huge supportive community.

I am grateful. Very, very grateful.

NOTE: If you're new to the Gratitude blog posts, this may give you some context.

Posted by coffeemommy at 3:03 PM No comments: