When a Hug Just Can't Fix It

If an end must come, and it must for all of us, then making that end beautiful and peaceful feels the way to go.

And yet I have also railed mightily against death for my friends killed by cancer.
My friends taken before they had the benefit of seeing their kids graduate from high school or in some cases, even kindergarten. And, in many cases, before those amazing humans were able to have kids at all.

But I have never seen a man murdered, until I watched an officer of the law break the law and take the life of George Floyd. In full transparency, I couldn’t watch the entire thing. You can judge me for this but my pleading to the video “get off of him, get off of him” was not helping him or me and I knew how it was going to end.

I've been told before that I can't save the world and I remind myself that focusing my advocacy in the cancer community doesn't mean other issues aren't important to me - it just means I can't do it all effectively.

But right now, I can't NOT advocate my fellow humans.

I fight tooth and nail for personalized treatments, accelerated research and protective policies for individuals with cancer. But all the best treatments in the world mean nothing if you cannot access them.

And access to the best treatments in the world mean nothing if you are truly afraid of being murdered in broad daylight by an individual who has sworn to protect and to serve.

And this is about so much more than police brutality. Racism doesn’t exist in a bubble. Our “justice” system also unfairly targets people of color. Our health care system is plagued by implicit bias as well as explicit racism. We have significant wage gaps by race.1

The civil rights movement happened well before I was born but racial inequity persists in every single facet of our society.

I’ll stay “in my lane” for a moment and share that, health disparities are rampant in the cancer community.

Over twenty years after a groundbreaking breast cancer drug was approved, black women with breast cancer are still sometimes not offered the treatment.

In fact, “after adjusting for tumor characteristics, poverty and patients’ other medical problems, black women were 25 percent less likely to get trastuzumab than white women.”2

This is the treatment (also known as Herceptin) that not only changed the game on HER2+ breast cancer but is the documented standard of care. Yet, if you are a black woman, you may receive sub-standard of care.

Not only are black women frequently diagnosed with breast cancer at a more advanced (worse) stage than white women,3 African Americans have the highest mortality rate of any racial and ethnic group for all cancers combined and for most major cancers.4

To spell that out for everyone, being black means you are more likely to die from cancer.

The National Cancer Institute has a plan 5 to address these cancer health disparities but these issues don’t magically pop up when someone is diagnosed with cancer and then go away after treatment.
This is our society. This is what we’ve created.

And it’s not okay.

While studies have not gone so far as to label stress a carcinogen (cancer causing), stress has been implicated in the acceleration of cancer metastases 6 (spread) and in this meta-analysis, work stress was called out as having a role in the increased incidence of cancer.7

What could possibly be more stressful than waking up every day knowing that you, while living in a country that claims, “all men are created equal,” face a persistent threat to your very survival based on the color of your skin?

When the 2016 election didn’t pan out as I’d imagined, and our country elected an individual renowned for misogyny among so many other things I do not support, I told my daughter, “The sun will still rise tomorrow morning.”

And the next morning, I shared this with my community:

So the sun did indeed rise this morning.
K stayed up as the results were finalized. Ri's first question was, "Who won?" Both kids have been actively involved in this election and now have similar concerns about what the next four years might bring.
And while our breakfast conversation addressed concerns and fears, we instead focused on the reality that we, as individuals, have as much influence as we had yesterday. As always, we need to use our influence for good, not evil. And, we need to ensure that in our immediate sadness, frustration and fear we do not turn into individuals who denigrate other individuals. Instead, we need to love more vocally, stand up for what we believe in more overtly, use our voices to reinforce what we feel is right and speak out against what we feel is wrong.
This is how we put one foot in front of the other with respect for ourselves and respect for others. 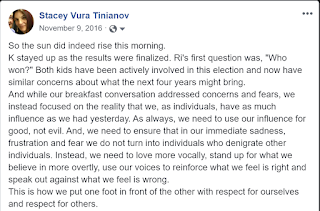 We now find ourselves in the middle of Santa Clara, under both a Shelter-in-Place order triggered by a microscopic and deadly coronavirus enemy, and under a 7-day curfew that was ultimately triggered by the murder of a human being after years, decades and centuries of inequity in our society.

I have confidence in science that we will be able to address the first threat of COVID19 but the biggest threat to our society and, ultimately our humanity, is the way we treat our fellow humans.

Fundamentally I believe that hugs are magical and are frequently the remedy to what ails us. And, as much as I love a good hug, hugs alone will not fix this. It takes voices and actions.

I have raised my children not to tolerate the intolerable and the racism in our country is not, and has never been, tolerable. From the education system to the health care system to the very obvious police and justice system – we are NOT a united nation.

There are over 300 MILLION people in this country. We don’t have to agree on everything and we don’t have to look the same to become united, but we cannot look away and we must speak up.

And, if you are going to be an advocate, you may want to consider something else that I've learned in my last seven years as an advocate in the cancer community - advocating is not just about speaking up once or twice. 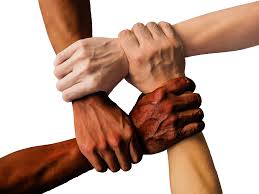 Posted by coffeemommy at 9:44 AM