Please Don’t Look Away for Goodbye

While birth and death are two things that unite every single being on this planet, our society tends to celebrate one and fear the other regardless of its inevitability.

My friend Ellen died on October 4th. Metastatic ovarian cancer killed her. Unlike many of my other “cancer friends” she is someone I was friends with BEFORE cancer was diagnosed in either of us.

We shared all the appropriate swear words. I answered as many of her questions as I could and connected her with individuals and organizations that could help us find answers for the rest. I gave her head covers and peppered her with details about the clinical trials she was interested in learning more about. I met her oncologist to help ask some of the questions she was concerned she wouldn’t remember and I sat with her during one particularly frustrating chemo treatment. But I didn’t even begin to imagine the most valuable gift I would give her, and she would give me, would be our final goodbye.

She rocked surgery and chemo but knew something was off about four months after her treatment ended. A scan six months later revealed a recurrence. And that recurrence was soon metastases. And then we began searching for trials in earnest.

She was a force to be reckoned with on so many fronts and her approach to putting cancer in its place was no different.

As treatment after treatment failed, we started to talk about her hopes, her fears and how to get the people she loved most to address those with her. She didn’t want to die but she sure as heck had ideas about how she wanted to go.

After some particularly debilitating side effects, she looked forward to finding the ever elusive next potential treatment after October 1st when she had recovered from a cancer-related surgical procedure. But cancer is a wily beast and a number of complications put her in the hospital and on a ventilator just days before that appointment could happen.

While I expected she would not respond, I wanted her to know she was on my mind so I continued to text her in the ICU. And one day, she responded. 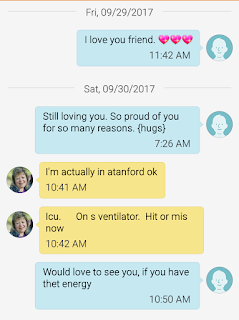 I cackled aloud receiving her text, imagining her slyly sneaking her phone and trying to text around the ventilator I knew she was still not happy about being attached to, and I responded that I'd love to see her if she had the energy.

I am always cautious about inserting myself into situations where I may be more hurtful than helpful. When someone’s time on planet is so limited, I want to respect there is a priority order to energy and time spent with others.

But, after a few days and a message from her husband that she was moved off the ventilator and breathing on her own, I stormed the hospital.

I found her in the courtyard with family. She was unable to speak (not aphasic, just throat irritation from being intubated) and visually aged.

But she was lucid. And she smiled. I’ll never know whether the tears were happy or sad but I imagine they were a little bit of both – much as my sobs were on the way home.

And I was able to tell her goodbye.

There were no illusions; that 90 minute visit would be the last time I would see her. She was afraid I would leave and so I stayed until we had shared our words and hand signs and her eyes began to close. That is a powerful moment - the extent to which I am unable to convey in words. Minutes of no words, just eye contact. Just facial expressions. Just being with someone and assuring them you remember all the things from all the conversations. Promising that you will continue to advocate on their behalf.

Just seeing, feeling, holding space for and with an amazing energy and touching a soul for the final time.

I walked away with tears but so full of gratitude for the opportunity to say ‘all the things’.

I texted her the next day, well aware she would likely never see the text.
But she did. And she sent me one in return. 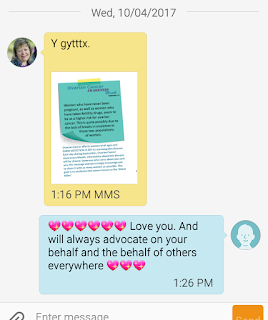 An advocate until the absolute end.*

I am grateful beyond words to have been there until the end. So grateful for the chance to say goodbye.

So please, never turn away. Bear witness to life. While that shell of a body may not be the body you remember, that person you love is inside. Be with them until the end and that time will be a gift for you both.

*I have convinced myself, and no one can convince me otherwise, her words are “You get it.” And with those words and that image, she’s reminding me to continue to speak the realities of ovarian cancer to catalyze more efforts around improved screening and treatments.

Posted by coffeemommy at 9:19 AM No comments: