Sitting in the waiting room of pediatric gastroenterology, the double stroller next to me contains two young children, both with hacking, productive coughs. My son has just ingested 44 grams fructose and we’ll be here for the next three hours or until he “breathes a 20” on the handheld hydrogen breath test, whichever comes first.

Our pediatric GI relationships began shortly after his birth when he was diagnosed with gastroesophageal reflux disease, or GERD, and began losing weight at the wee age of four months. Major surgery was recommended and we deferred hoping to find a less invasive solution. Oddly enough, we found chiropractic care. Physical adjustment, combined with Prevacid, kept his ruminations below 30x day and took him off the short list for a fundoplication. He began to thrive.

Reflux has never vanished from our lives but everything has been manageable, until recently. At 13, my son is 5’6”. He stands a full 2 ½ inches over me, yet cannot seem to break the plane on 100 pounds. And a couple of months ago, he started losing weight.

As a mother, I have extensive on the job training and a high comfort level with acute illness, first aid, sugar-induced hyperactivity, night terrors, friend problems and homework frustration. Another “failure to thrive” diagnosis, however, prompts only dread.

At the most basic level, I just want to fix things. I have gut issues, food allergies and intolerances and I know just how frustrating it can be to have persistent tummy troubles. The teenage years are fraught with so many other speed bumps, concern about what you can and cannot digest effectively enough to maintain your body weight shouldn’t have to be part of the process.

So, after a two-week elimination diet, a course of probiotics and a trial of high fiber supplementation, Dr. A has suggested we run a hydrogen breath test. We are testing for a fructose malabsorption problem. So after swallowing the equivalent of a bag of Skittles dissolved in water, we’ll hang out in the waiting room for a couple of hours. Every thirty minutes, the medical assistant will bring the breath test to us and Ri will blow into it. His baseline parts per million of fructose was zero so a positive test is a reading of 20ppm at any time. 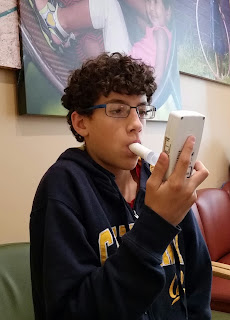 Unfortunately this test only measures hydrogen production and approximately 35% of the population actually produces methane rather than hydrogen with a malabsorption issue. In other words, we could leave here with no answers.

And then there is the perspective of the past few weeks and past few years: things could always be worse. This particular issue is disconcerting, frustrating and a definite annoyance but Ri is bright, happy and generally healthy.

So, after a 12 hour fast, and a couple of hours hanging out with sick, and vocally unhappy children, at least our next steps are clear - he has already chosen his post-sugar high lunch spot.

NOTE: This post approved for public consumption by the 13-year old.
Posted by coffeemommy at 10:11 AM