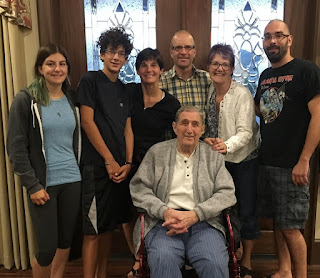 And, at the end, he felt he had too much time.

With advancing dementia and retreating physical ability, he was frustrated and, at times, sad.
Having visited with him in December, I am aware that he had absolutely no desire to reach 93.
In other words, I know that Bumpy lived a long life and died a peaceful, natural death but I am still feeling a loss.

This may seem like a no-brainer to many people, “Duh, your grandfather just died. Of COURSE you feel sad.” But my brain is telling me I need to stay in the “grateful for a long life space”. My brain is reminding me that everything and everyone dies.

My brain is actually kicking me under the table hissing, “You are being selfish; his quality of life was poor and he was suffering.” Granted, the brain talk is having some effect since my sadness is not the devastation I feel when a young mother dies of cancer or the devastation I feel when cancer kills another friend before she can celebrate her 40th birthday, but it remains a pervasive sadness nonetheless.

Normally, when a friend dies, I just mull through my emotions until they channel me toward action. I would process my grief by typing, exercising, intellectualizing and allowing myself a maximum of 15 minutes of crying the shower.  I would think about the support I need/want/deserve but I would refrain from reaching out to avoid burdening others with my sorrow until I was strong enough to hold theirs.

In this case, I began to belittle my own grief by reminding myself “this isn’t about you, Stace” and reminding myself to be grateful for the nine plus decades of time he had on this planet.

And then I did something wildly different.

I actually told people that my grandfather died.

I told people that I was sad.

I reached out to a handful of people that I knew wouldn’t freak out with niceties or try and blow perfume up my arse but instead would offer just the head nod, the warm embrace, the validation and the grounding that I felt I needed.

(My gratitude to you circle of peeps is immense. Truly.)

This time I shared my grief by reaching out. Instead of worrying about the burden my tears placed on other people, I allowed myself to be vulnerable, even needy. This new approach meant hours of fielding phone calls and sharing grief and gratitude with friends and family.

Sometime around noon I realized I was actually navigating my grief rather than pretending it’s not on my roadmap. And I’m crowdsourcing my support.

At the end of the afternoon, I was grateful but still sad.

I felt I had already recognized my emotions but still felt that stuck feeling.

I felt at a loss for what to do next.

And then while sharing some of my fonder New England memories with a sage co-worker, I felt that flood of emotion again, “I just feel sad,” I said.

His reply was soft and his eyes were filled with compassion. “Well then just sit with that,” he suggested.

I crooked my mouth (and probably my eyes and head) thinking, “Hey, that’s what I say to other people. How are you using my own words on me? And, oh by the way, I HAVE been sitting with it. For like eight hours.”

Instantly I recognized that the premature death of friends has been a driving force in what I choose to do day-to-day with my advocacy work. Advocacy work wrecks me and fuels me - mostly at the same time.

Bumpy’s death leaves an enormous gap, feels like a tremendous loss and catalyzes an enormous wave of memories but there no rage. No anger. No motivation.

“There are no stages!” I thought to myself.

Typically I feel myself going through all the seven stages of grief. Quite frankly, on an average day, I feel like I’m living in all seven stages simultaneously. And then I move onto the action part of my personal grief roadmap.

But for me, when a good man dies a good death at an advanced age, there is really no room for shock or denial. When your 92 year old grandfather has a DNR in place and his quality of life is being reduced by the limitations of his body and dementia, there is simply no need for bargaining or anger when he peacefully takes his last breath. There is only room for fond memories, tremendous gratitude and sadness that seems to want to hang around for awhile.

I am grateful. But I’m still sad.

And now I’m gonna sit with that for a bit. 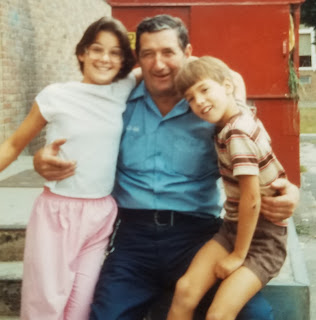 Posted by coffeemommy at 5:49 AM