Patient-centricity in healthcare has become a buzz word. But what does it really mean?


Patients, caregivers, advocates, health practitioners and providers alike seem to agree that the term references designing a system or service around the needs of the patient. Specifics of what makes something “patient-centric” may vary by service or system but all models and flavors of patient centricity seem to favor stronger communication around patient goals and needs.

So, what happens when patient and practitioner never meet?

At the end of May, I was prescribed a chest MRI to check the status of my now 3-year old breast reconstruction silicone implants. Evidently this is protocol (FDA recommendation) to check for silent rupture, so I made my scan appointment, showed up on time and had my scan. My summer travel schedule was intense and, because I had no immediate concerns about my implants, I assumed results would flow in whenever they were available.

Four weeks later I was still waiting for results.

In my patient portal, I could see that my provider was on vacation so an email seemed like wasted effort. I called the radiology office (not on the campus of my other providers) and no one seemed to know who had my results. I had no ability to contact my radiologist via my portal or even determine who “my” radiologist was. Eight weeks later, I finally emailed my plastic surgeon explaining that I was frustrated and that all I was looking for was a YAY or NAY on my scan. He responded very apologetically with something to the effect of “I thought you’d get an automated message through the system.”

Fair enough, he thought I would be informed by someone else or some other process.

So let’s just assume for a moment that had happened.

I would have received an email with something akin to “Congratulations, your MRI was negative.”

But what exactly DOES a “negative” result mean? In this case, it meant no evidence of rupture.

But what if I had questions?

As it so happened, I did have questions. “What is the status of and size of the seroma in the pocket of my left implant?” I asked via email to my plastic surgeon.

Dr. H is a fabulous guy but, as he succinctly stated in his response back to me, imaging is not his forte. “A seroma was not mentioned in the report by the radiologist. Do you feel that the seroma is still there?”

Through this experience, I am realizing the numerous additional challenges radiology has in designing with patient needs in mind and wondering how we might improve the overall patient experience by making stronger connections.

Please join me and fellow patient advocate Andrea Borondy-Kitts on Twitter to discuss “What does patient-centered medicine in radiology mean to you?” during the #JACR tweetchat Thursday, July 27th at 9amPT/12noonET. 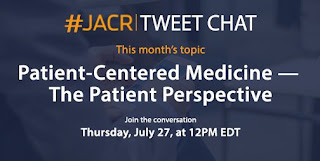 For additional background on this topic, please read Andrea's June 2017 JACR blog post Patient Engagement One Radiologist at a Time.
Posted by coffeemommy at 5:19 PM