And BOOM. There it is. Definitive diagnosis of Fructose Malabsorption (formerly referred to as Dietary Fructose Intolerance or DFI).

Ri had his 44g dose of fructose at 9:07am and we were sent out into the waiting room to spend the next thirty minutes while the sugary substance worked its way through his system. When the doc returned with the ‘blower’ Ri was surprised to see 0ppm as the result.

“That’s weird,” he said a bit mystified. “I can definitely feel the bubbles.”

We were reminded that, if his body produced methane in response to the fructose as opposed to hydrogen, this test would unfortunately provide false negative results.

And so we went back to waiting. At 10:08am, Ri said, “She’s late. I was supposed to have tested again already.”  Unbeknownst to me, he’d put an alarm on his watch and was following the testing protocol to the letter. As I approached the check-in desk to ask about the timing, a sick toddler began to scream and an infant let loose in sympathy.

“Excuse me, we need to check for hydrogen and we’re a little overdue,“ I said to the admin. “But, I can see you’ve got a lot going on.”

“Perhaps you could call her?” I suggested knowing immediately that we were triaged to the back of the proverbial bus.

Ten minutes later, our breath kit arrived with apologies for the tardiness.

As Ri physically prepared to blow into the machine, I mentally prepared for another hour and 45 minutes of futile waiting and bad magazine reading.

He evacuated his lungs and then continued to watch the monitor. “Wow,” was all he said.

I quickly craned my neck to see what he was seeing: 48, 49, 50, 51… A test of 20ppm would have indicated a diagnosis of fructose malabsorption. In classic Ri form, he was chasing those bonus points. 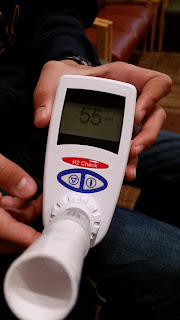 The breathalyzer stopped at 55.

At that exact moment my emotions were a combination of dread and relief. The “Oh $hit” and “At least now we know.”

Ri was nonplussed and not one bit surprised. “I knew it was that Mom because when you stopped buying apples, everything got better.” And, hungry after his fast, he didn't miss a 13-year old boy beat, “Is Pho Ga low fructose? Can we go to lunch now?”

At some level my emotions are still a combination of dread for THIS diagnosis and relief for A diagnosis. Ultimately, at least now we know and, as the 80s icon GI Joe always reminded us, “Knowing is half the battle.”

Posted by coffeemommy at 8:49 AM